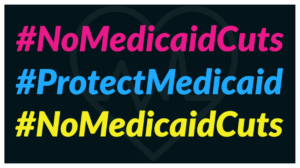 The Governor is proposing major cuts to Medicaid and CDPA is on the chopping block.

Wednesday, March 11th is a Day of Action to Protect Medicaid!

CDPAANYS and 100+ other groups are calling on the Legislature to #SaveCDPA and Protect Medicaid. We need your voice to amplify the message:

Medicaid is a vital program.
Don’t balance the budget on the backs of New York’s seniors and people with disabilities!

Phone Your Legislators’ Albany Offices:
Call your State Senator and State Assemblymember to oppose cuts to Medicaid.  Tell them:

“As your constituent, I urge you to reject Medicaid cuts coming from Governor Cuomo’s Medicaid Redesign Team II. Remove the MRT II from the budget process and tax the ultra-wealthy to raise revenue needed to balance the budget.”